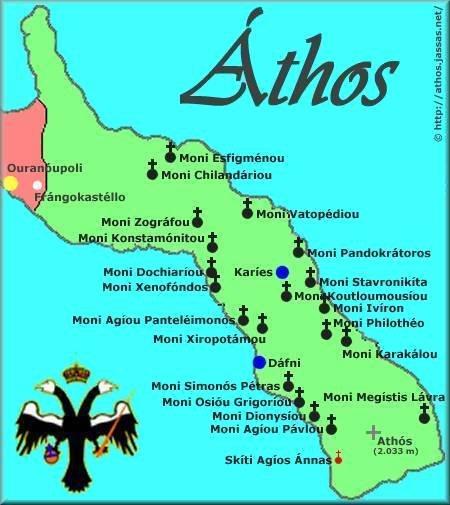 Mount Athos is situated in the entire third, eastern and most beautiful peninsula of Halkidiki, called the peninsula of Athos. It is the only place in Greece that is completely dedicated to prayer and worship of God. For this reason, it is called the Holy Mount. The Holy Mount is about 50 Km in length, 8 to 12 Km in width and it covers an area of about 350 square kilometres. The borders of the monasterial city are defined on the ground by an imaginary line that starts from the location "FRAGOKASTRO" in the West coast and reaches the cape "ARAPIS" in the opposite end. The natural beauty of the peninsula is extraordinary. The highest point of Mount Athos is like a huge cone, reaching 2033 metres in height. It’s a naked, treeless crest that seems to lance the sky and its slopes are fully covered by ancient evergreens. All these help to create an area of incomparable natural beauty.

According to mythology the name Athos belongs to a Thracian giant. During the conflict between the Gods and the Giants, Athos threw a huge rock against Poseidon (the God), but the rock slipped through his fingers and fell to the sea creating a huge block of land which is now Mount Athos. In a different version it was Poseidon who threw the rock against Athos. The rock crushed Athos and burried him underneath. This rock was called Mount Athos.

Up to the 3rd century BC, there where quite a few small Greek towns in the peninsula. Later, for unknown reasons, these towns fell into decay or were destroyed, resulting in a deserted area for many centuries.

According to tradition, the Virgin Mary with John the Evangelist, or their way to visit Lazarus in Cyprus, encountered a stormy sea that forced them to temporarily seek refuge in the port which is now the Holy Monastery of Ivira. The Virgin Mary, admiring the wild beauty of the place, asked God to give her the mountain as a present. Then the voice of our Lord was heard saying: "Let this place be your lot, your garden and your paradise, as well as a salvation, a haven for those who seek salvation". Since then, Mount Athos is considered as "The Garden of the Virgin Mary". In the 5th century AD, the first monks came to Mount Athos, who disappointed from the boredom of everyday communal life, found this beautiful and uninhabited place ideal for worship their God.